This ride on my Super Tenere was day 2 of a three day 5000km ride on three Bikes.  For the full details see The Cheapskate SS5000K entry on my Iron Butt Ride Blog.

Today I took a familiar route west out of Newcastle and struck fog and mist not long after getting on the Hunter Expressway.   Here was my view heading towards Merriwa after the sun came up.  The heated grips on the Super Tenere were on and appreciated as were the BMW Pro Winter II gloves. 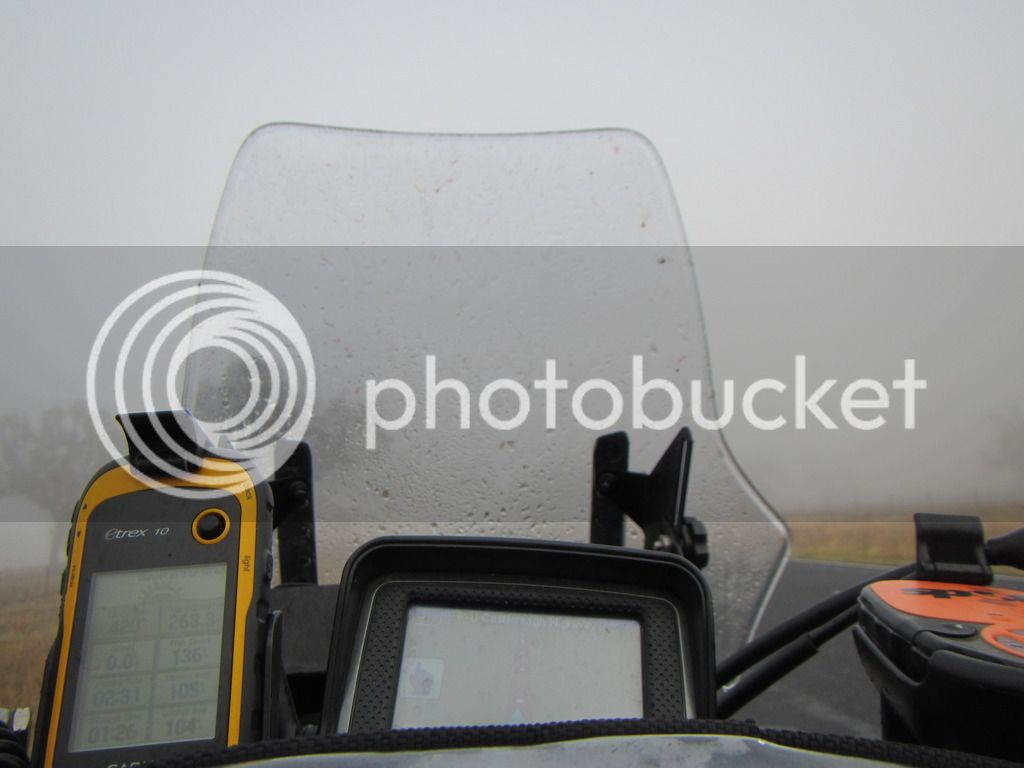 The fog continued to Dunedoo where I stopped for a muesli bar near the pub. As you can see the town was packed this time of the morning.

I turned right towards Mendooran where I would normally need to refuel from a jerry. I had 2 x 10 litres on board and with yesterday’s fuel range successes in mind I decided to ignore my instincts and keep going. I rode 90kms in reserve and made it to Gilgandra, cheering on the inside. There was no doubt that running the Super Tenere without the side panniers contributed to this.  There’s no point dragging stuff through the air you don’t need.

I filled the front tank at the Shell Truckport and took the road to Narrabri, today was about some roads I haven’t been on this year and some I have never been on (I think).

Holiday traffic was about and so were the wide loads

and at one point I got a bit of a fright coming past the front of a truck I was overtaking and glimpsing a speed camera on my left. I grabbed a corner docket at Narrabri planning to use the jerrys between there and Bourke but by another stroke of luck I made another 90km foray into reserve and filled the front tank only in Walgett.  It was this stretch between Narrabri and Walgett I don’t think I’ve been on before.

This piece of great fuel management (a.k.a. luck) allowed me to really push the fuel legs out so I got another corner docket at Bourke rather than fuel and filled the tank from the jerrys at the Bogan sign between Bourke and Nyngan. I was wary on this road, last time I rode down here a kangaroo took half the faring of my CBR125R off during half way through an SS2000K.

This fuel got me through Nyngan and back to Gilgandra where I took a nice relaxed stop, utilising some of the banked time back at the Shell Truckport.  They do a fantastic plain burger and a reasonable coffee.  I also filled the tank only, leaving the jerrys empty, crossed the fingers and made it back to Newcastle without stopping again!  Crossing the fingers worked out but it was very, very close. Yep, I’ve called myself an idiot.

All up 18hrs 44m for the 1747kms for today’s run. Sadly they were rewaxing the floor at the local servo so I missed out on my post ride Cherry Ripe and had to settle for an ATM docket down the road.

I’d planned the farkle exchange on to the next bike for the morning with a bit of a sleep in to take advantage of some more of spare time I had.

Tomorrow I’m heading out west again on my Honda ST1300.